If you’re considering going to nursing school or are already enrolled, there’s a good chance you’ll soon become more familiar with the HESI exam, which is a required entrance exam for many nursing programs.

The HESI exam is a good predictor of nursing student success, and many schools use it as part of the admissions criteria for acceptance. Nursing students can use HESI’s exams and study materials during their program. Not all colleges and universities use HESI. However, assisting students in studying and passing their license examinations is becoming more popular.

Let’s review the HESI exit exam and NCLEX pass rate so you could have an entire view of these exams and have an appropriate study plan. On this website, you can review all your basic knowledge with our free HESI A2 practice test.

It’s hard to predict the likelihood of a nursing student passing and graduating from the NCLEX for the first time due to the numerous interacting variables that influence success or failure (Uyehara, Magnussen, Itano, & Zhang, 2007). Many nursing programs use standardized assessment programs to predict the success of students on the NCLEX despite this difficulty, (Holstein et al., 2006). And many schools have policies that until students have reached certain scores on these tests, they are precluded from graduating.

According to data collected by the NLN in a 2011 survey, 20% of RN programs require a minimum score to graduate, 33% required a minimum score on a standardized test to progress, and 12% will not allow students to register for the board exam until they get a minimum score. However, as Spurlock (2006) has indicated, there is little to no guidance available to faculty who would like to set cut, or decision, scores for their graduation or progression policies, and there are no accepted policies in place as to how to best implement standardized examination (NLN, 2012).

This process of using these tests to allow for graduation and progression is also known as “high-stakes” testing (NLN, 2012). The Assessment Technologies Institute and Health Educational Systems, Inc., (HESI) are two of the most often used testing programs in high-stakes testing (ATI). Many schools use the HESI Exit Exam (E2 ) as an NCLEX predictor test, despite the fact that both firms offer a suite of exams.

HESI has a host of assessment products, but the HESI exit exam (E2) is the one most often used to “predict” NCLEX success. The HESI E2 is a 150-item comprehensive exam that uses a blueprint similar to that of the NCLEX-RN exam to assess student preparedness for the NCLEX-RN.

Individual student scores are linked to a reported likelihood of passing the NCLEX-RN in most of the commercially available standardized predictive tests. The typical cut-score for the HESI Exit Exam (E2) is 850, while some schools use a 900 cut score. (For HESI scores and their reported “correlation” to NCLEX success, see Table 1).

To further explain this point, I’ve included additional graphs and study summaries below. Figure 1 is based on data from Lewis (2006), as given by Spurlock (2012) about the HESI score and NCLEX pass rate. 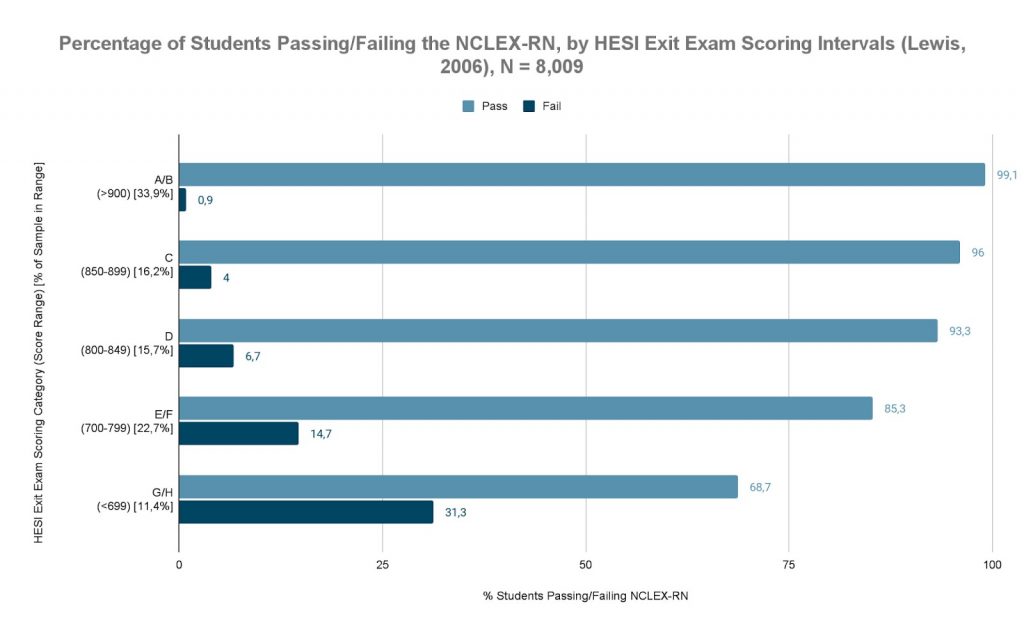 Only 13% of individuals in the “do not progress” group actually failed the NCLEX when they took it when using a cut score of 900 (above which students progress, below which they do not). This indicates that 87% who have been told they have not met the “standard” could actually pass the NCLEX. 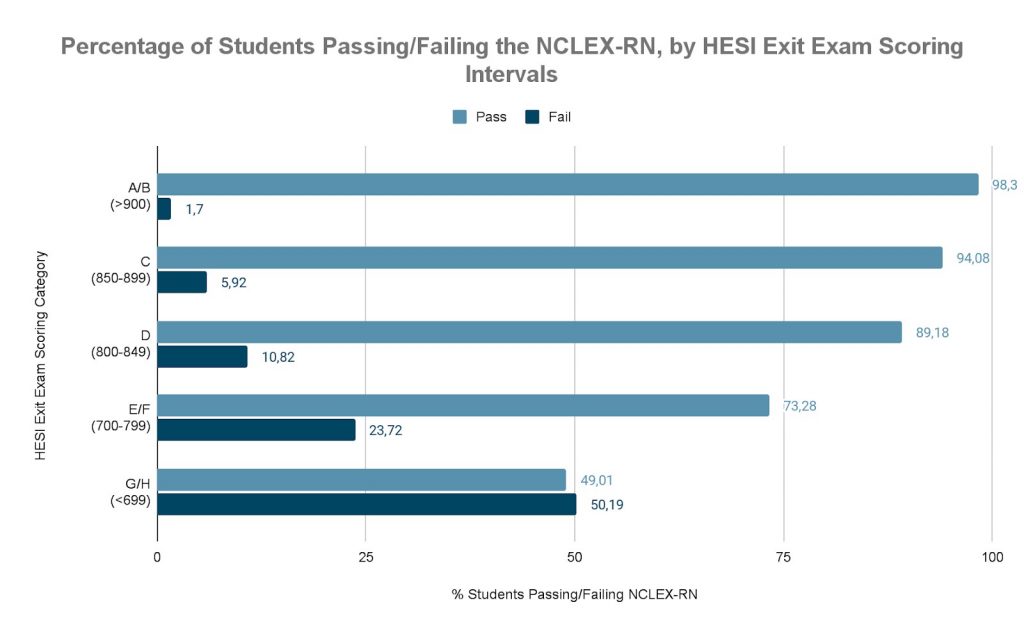 The proportion of students in each category of the total population (N = 5,903) was as follows:

When using a cut score of 900, Nibert et al. (2002) discovered that just 19% of those in the “do not progress” group actually failed the NCLEX when they took it—again, the HESI exam was incorrect for 81% of this group.

The exams were scored using “HESI’s predictability model,” which has not been described in the literature, making it difficult to assess its validity or effectiveness.

The results are listed in the table below. Low percentages of students expected to pass (for example, 49% of ADN students and 42% of BSN students) and low numbers of students who were predicted to pass but did not. This means that the HESI Exit Exam is generating a large number of false-negative results, or telling a large number of people they won’t pass when they actually do, and only telling a small number that they will pass when they actually don’t.

The following is the most striking aspect of the presented results: When we look at the overall number of RNs, we can see from Table 2 that 1,248 RN students (48.4% of the total sample) were expected to pass the NCLEX. 34 of the 1,248 students who were expected to pass failed. This corresponds to an “error rate” of 2.7%.

However, what about the 1,307 students who were not expected to pass? What was the outcome of their test?

If they’re not expected to pass, they were very certainly expected to fail, but we don’t know if they did. And if they didn’t fail, this should be taken into consideration when assessing the accuracy of the predictions. There were 1,307 students in this sample who were not expected to pass. And the results would be considerably different if they passed at the national NCLEX passing average of 86.7% in 2008.

There would have been 1,133 students who passed when they were informed they would fail if the remaining students who were NOT expected to pass ended up passing at the national average. This means that the predictive model was 86.7% wrong.

“The HESI E2 was found to be highly predictive of students’ success on the licensing exam,” the study continues goes on to say. The accuracy of HESI E2 predictions of NCLEX success was so close to the students’ actual outcomes on the licensing exam that the odds of these results occurring by chance alone infinitesimal…” (according to Lauchner, Newman, & Britt, 2008, p.7).

What HESI score is equivalent to passing NCLEX?

According to studies, the HESI Exit Exam has a 96-99% estimated rate in predicting NCLEX exam success. That indicates that most students who receive a 900 or higher on the NCLEX exam are likely to pass.

What is a good HESI conversion score?

Is the exit HESI harder than NCLEX?

According to studies, the HESI Exit Exam has a 96-99% estimated prediction of the NCLEX exam success. It means that most students who receive a 900 or higher on the NCLEX exam are likely to pass. Not all, but the majority of students. This is a crucial distinction.

How does the HESI compare to the NCLEX?

Although the NCLEX and HESI exams are both nursing knowledge assessments, the objective of the tests differs significantly. Instead, the HESI gives students to practice before they take the NCLEX, preparing them for the types of questions they’ll see on the actual exam.

What is the passing rate for the HESI?

On a scale of 0 to 100, each section is scored separately. For the HESI exam, schools set their own passing scores. For each section of the exam, most schools require a minimum score of 75%. Some schools, on the other hand, may require students to receive a 75% on one section and an 80% on another.

What is a good score on the HESI exit?

Before graduation, most nursing schools require students to take and pass the HESI exit examination. The minimum passing score to graduate varies by school, but in general, a score of 850 or higher is considered an excellent score.

We’ve reviewed the HESI exit exam and NCLEX pass rate. Now is the time to construct an effective study strategy in order to better prepare for your actual exam. Take our free HESI A2 practice test to familiarize yourself with the format and questions of the real exam, and then pass it with flying colors on your first attempt.